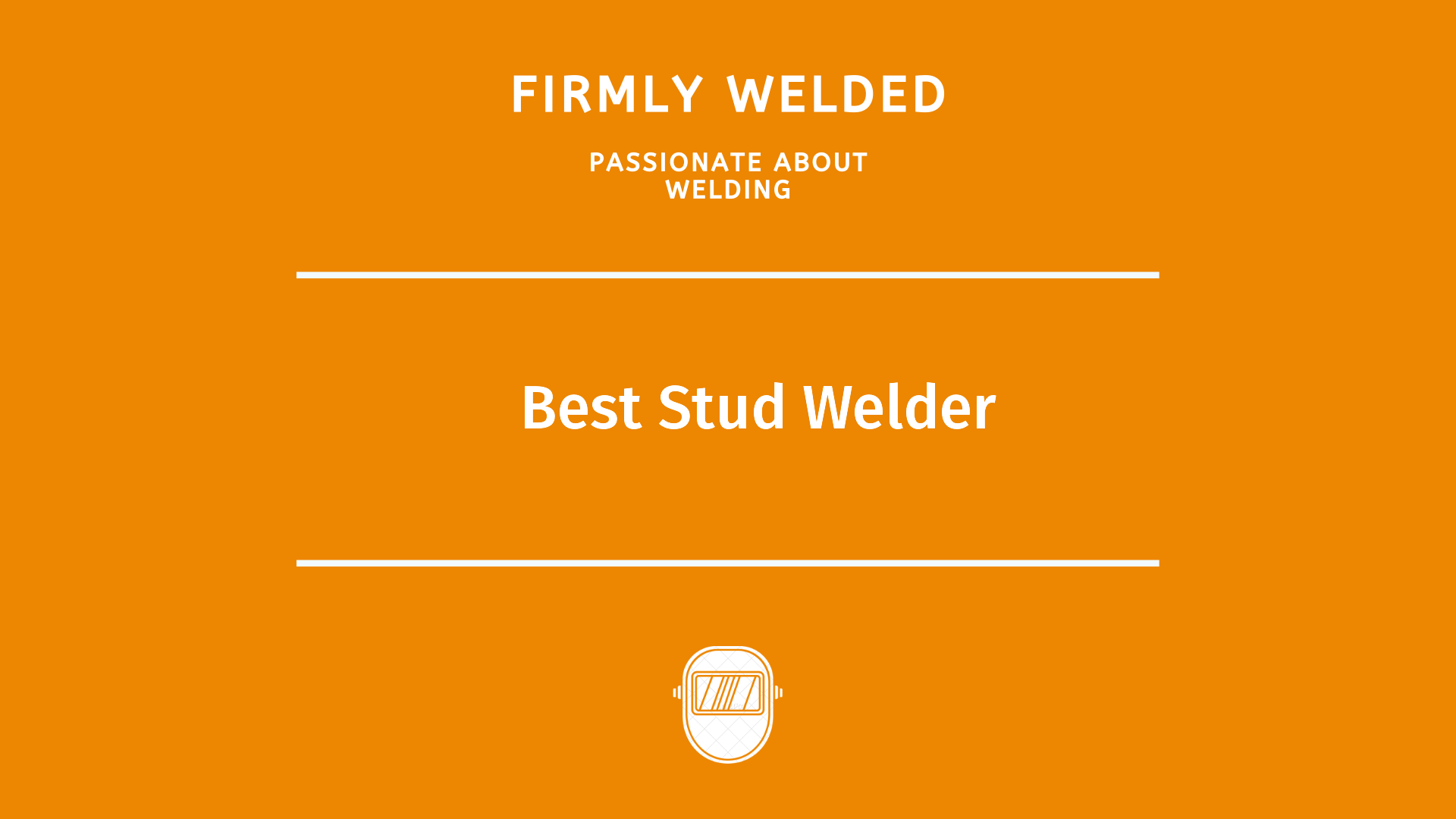 Stud welding equipment is used in the production of all types of metal parts. Whether for technical equipment or in vehicle construction. Hardly anyone can imagine what a stud welder looks like or how it is used because it is hardly used in private households.

What is a stud welder?

Stud welding devices are devices, systems and machines which can be used to weld metal studs or other components in pin form, onto metal or sheet metal parts. Threaded bushes or threaded bolts are also counted among the fastening elements referred to as studs. Actually, scientifically correct, the colloquial stud welding is called arc stud welding.

Arc stud welding complies with DIN 1910, stud welding equipment itself not very large. In terms of size, they are reminiscent of a small box which has a few knobs and wheels in the front area so that the voltage of the stud welder can be adjusted exactly as required. The welding device itself reminds of a pistol with an ignition tip. A distinction is made between ignition tips with a tip ignition and drawn arc ignition.

How does a stud welder work?

The molten metal of the bolt solidifies and hardens. The art of stud welding lies in the fact that the selected studs are welded firmly to the substrate without burning through. Depending on stud thickness and stud material, the short-time drawn arc ignition method is therefore used. This allows welding times and 0.1 seconds (with such short welding times the use of heat protection is not necessary). As soon as the materials to be welded do not have to be protected more intensively against the heat generated, special shielding gas or a ceramic ring is used as protection against the heat. Regulated rectifiers are often used as welding power source for drawn arc stud welding.

For tip ignition, the manufacturers provide the studs with a welding surface at the tip.

As soon as the welding current is switched on, the attached tip is ignited by the arc and melted off. The stud therefore no longer needs to be lifted off separately. As soon as the fusion is sufficiently advanced, the stud can be pressed directly onto the sheet metal or another metal surface and welded to it due to the fusion. Capacitor discharge welding power sources are used for capacitor discharge stud welding units with tip ignition.

During capacitor discharge stud welding neither a ceramic ring nor shielding gas is used for material protection. In welding itself, a distinction is still made between the gap process and the contact process. In the gap process, a gap dimension is defined which indicates the height from which the stud moves towards the component. With the contact method, the stud is seated directly on the component right at the beginning of the welding process. In other areas the welding processes do not differ in any way.

Bolts, hooks and eyelets often have to be firmly attached to a metal surface. Bolts with threads are welded in the same way as bolts without threads. If, for example, a bolt or hook is welded to a tank, the tightness of the tank must not be impaired in any way. The attached studs must be stable without permanently reducing the usefulness of the base. Fasteners of various types shall be firmly fixed to the sheet metal or other metal substrate.

These can be individual productions as well as large series productions. The short-stroke ignition and the tip ignition are used when studs are to be fastened on thin sheets. The processes can be used for a sheet thickness of at least 0.5 millimeters. From a plate thickness of 2 millimetres upwards, normal drawn arc ignition is more likely to be used for stud welding.

The use of stud welding equipment is not limited to any specific industry. The necessity exists in house construction (facade parts and insulation must be applied using studs from time to time), as well as in shipbuilding, bridge building, bodywork construction in general, automotive construction, steel construction, apparatus engineering, the electrical industry, manufacturers of fittings and household appliances and appliance chassis.

Stud welding technology is not only necessary for new productions, but also when old equipment, vintage cars and unique specimens have to be repaired. Especially when old production lines and machines are converted, individual conversions, adjustments and repairs may be necessary which cannot be carried out without a stud welding unit.

What can be welded with a stud welder?

With a stud welding unit, studs, hooks, eyes and pins made of metal (with or without thread) can be welded onto metal. Depending on the thickness of the material, different welding techniques have to be used. During stud welding, the stud or pin should melt with the substrate and cool down again, but not melt away completely.

The handling of a stationary stud welding unit requires some experience. Operators should have attended a training course. Not only the most varied welding techniques must be known, but also knowledge of the melting behaviour of the most varied metals and material thicknesses as well as the use of the necessary protective mechanisms (shielding gas or ceramic ring). Craftsmen who are not familiar with a stud welding machine can cause great damage.

Brief instructions on the handling of stud welding equipment should be posted at each workstation to avoid handling errors. Not only protective gloves should be worn but also safety goggles and ear protectors. Otherwise, tabletop stud welders can be easily transported and used. A transport case is usually included in the scope of delivery. Before the stud welder can be used, the metal base (sheet metal) must be firmly fixed to the work surface (preferably with screw clamps).

The stud to be welded onto the substrate is firmly anchored into the gun of the stud welding unit, partially screwed in. This allows for exact guidance of the materials and welding work can be carried out without errors and without danger.

Loading...
Training courses according to DIN EN ISO 14555 can be held to ensure safe operation of a stud welding unit. Instruction is always advisable.

Stud welding units have been designed to create a stable connection between a metallic stud and a metallic substrate. A wide variety of metals can be fused together. Stud welders made of aluminium, brass, copper, steel, stainless steel etc., for the exact application of the different studs and techniques, manufacturers should be consulted. The different welding methods used for stud welding allow for a wide variety of results. The reverse side of a very thin sheet metal can be completely unmarked and uncoloured if studs have been welded on the other side of the sheet metal.

However, traces may also be visible if a different stud welding process was used. Therefore, before buying a stud welding unit, you should always have an extensive discussion with different manufacturers who have their stud welding capabilities. New innovations are constantly changing the technology and the possibilities in stud welding. The technology of stud welding has been successfully applied for more than 70 years.

Negative properties of stud welding units are not visible if they are used exactly as specified by the manufacturer. As with any other welding equipment, the necessary protective measures must be observed. Stud welding is not time-consuming. As a rule, it only takes one second to weld a stud.

After stud welding, quality tests will be carried out again and again. The welded stud is bent up to an angle of 60 degrees. During these tests, only fractures in the stud or substrate may occur, but not at the welding point. If these quality requirements are met, stud welding has been successful.

To ensure that stud welding units always work perfectly, they should always be wiped with a clean, dry and soft cloth after use. Fine dust penetrating into the device housing may cause damage in the long term. Heavy soiling should never be removed from the device housing by an operator using a damp cloth.

The danger of a short circuit would be much too great. As stud welding units are precision devices, care and maintenance should be left to the manufacturer. It is important that the devices are visually checked again and again to ensure that they are in perfect condition. Not only must there be no visible damage to the device itself but also to the cable.

As with all other electrical devices, the manufacturer’s warranty is void if stud welding units have been repaired improperly by laypersons and not by certified specialists.

How many amperes are required for stud welding?

In stud welding, between 50 and 2000 A are required during one welding process. In the case of tip ignition with a capacitor as the current source, a current intensity of up to 10,000 A can occur within 1 to 4 milliseconds.

What does a stud welder cost ?

The price of a stud welder does not depend on its size and possible use. Simple devices for the hobby handyman start at about 500 euros. Larger and more powerful stud welding units are usually individual combinations which are completely geared to the intended use.

The power source and other components are assembled so that the final product can meet the exact requirements of the customer. In the case of these individual devices, the manufacturers make offers to their customers that are still negotiable in terms of price. The final price is determined not only by the value of the individual product, but also by the quantity of equipment ordered.

The 5 major manufacturers and their respective characteristics

Stanley Engineered Fastening Assembly Technologies, manufacturer of fastening technology from New Britain USA, is represented as Tucker GmbH with headquarters in Gießen, Germany.NELSON Bolzenschweiß-Technik GmbH & Co. KG, the company is located in Gevelsberg and has been offering a complete range of stud welding equipment for more than 60 years. Heinz Soyer Bolzenschweißtechnik GmbH, developer of the magnetically moved arc. Everything is offered from tabletop welding machines to tip ignition and CNC technology. The company is located in Wörthsee, Bavaria.HBS Bolzenschweiß-Systeme GmbH & Co. KG. The company is based in Dachau, Bavaria. Beginners and professionals will find exactly the right stud welding equipment.KÖCO Köster & Co. GmbH, the company headquarters are in Ennepetal, Germany. The company offers a wide range of stud welding machines. Starting with simple portable solutions up to stud welding machines for shipbuilding.

What accessories are available?

A stud welder consists of a welding unit, which is necessary for power generation and allows the control of the welding head, a welding gun, for manual operation or an automatic welding head. As far as accessories are concerned, it depends on whether the stud welder is permanently installed and only used for special jobs or whether it is portable and used individually.

Here there is the possibility of plant integration with the aid of an automatic rail, the construction of special machines and CNC stud welding machines. Although industrial stud welding machines do not differ from tabletop machines in terms of technology, they do differ in their use and the possibility of purchasing accessories. Stud holders, ceramic ring holders, welding studs of all types and base plates are also offered as accessories.

What to look out for when buying?

Versatile application possibilities in metal and car body construction.studs can be welded firmly and safely to the substrate within 1 second.stud welders are portable and can therefore also be used on construction sites.after an introduction or special training (depending on the type of stud welder) the use of a stud welder is safe.short welding times, relatively low energy consumption, long service life