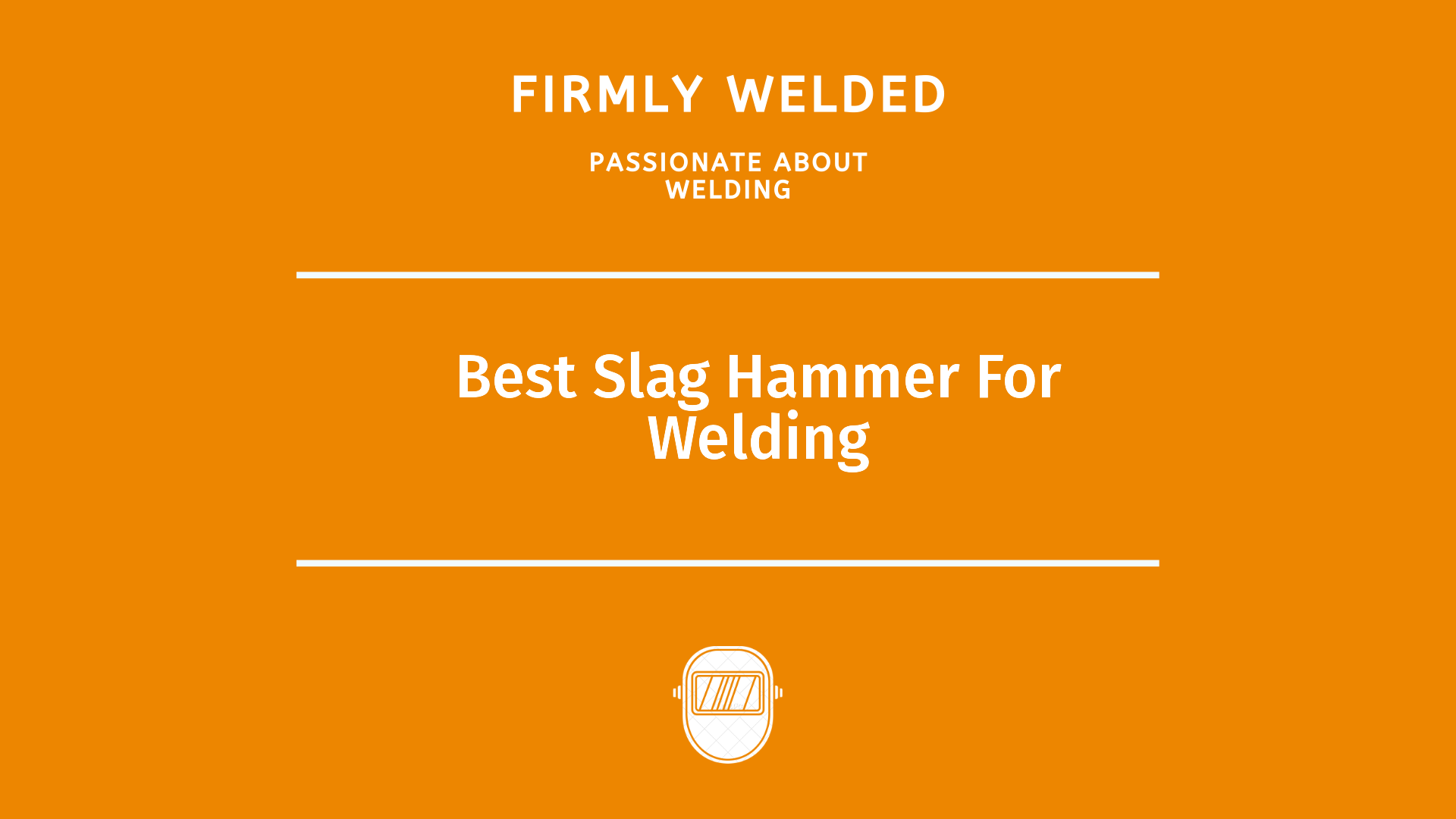 An important accessory for all welders is the slag hammer, which is also often referred to as the welding hammer. It is used to remove the slag from a weld seam after arc welding. The slag forms during the welding process and is removed after completion by the slag hammer and a wire brush, as otherwise no corrosion protection can be applied.

However, a weld seam cleaned from the slag is also visually more attractive and smoother. A slag hammer is very different in shape from a normal hammer as it is used every day. The welding hammer consists of an elongated rectangular head and has an elongated tip at the front.

A slag hammer is made entirely of metal, but the handle may well be made of a different material. Plastic is often preferred here, although the handles for professional slag hammers are often ergonomically shaped. Due to their compact shape, slag hammers are practically indestructible and have a correspondingly long service life.

They belong to the group of tools that actually do not need to be replaced due to signs of wear or the like.

In order to provide lasting protection against corrosion, the slag hammer is normally coated with an anti-rust paint. The special shape of the slag hammer makes it a special tool for welders, as it is otherwise difficult to use.

How does a slag hammer work?

A slag hammer is not a very complicated tool in its functionality. It is used after the welding process in arc welding to remove the slag from the weld seam. This slag is normally created during the welding process in arc welding, but it then disturbs the optics and can be quite disturbing if the weld seam is to be coated with a rust protection afterwards.

The welding hammer keeps tapping on the weld seam until all excess slag has been removed. A wire brush is often used for post-weld treatment, but the welding hammer is clearly the safest and most powerful method of removing slag from a weld.

The slag hammer is a special tool that is actually only used by welders to remove the slag from a weld seam. There is hardly any other possible use for it. But because of its special shape, it is ideally suited for the process of slag removal. Especially with small or thin welding seams, the tip of the welding hammer comes into its own, giving it its characteristic appearance. As the slag hammer is made of metal, its tip could be used to punch holes in another material if necessary, but this should not damage its tip, which is important for its normal task.

For whom is a slag hammer suitable?

A slag hammer is primarily suitable for arc welders as it is a very specific tool. However, nobody needs special training to operate or use a slag hammer. However, it is a very typical tool for a welder and is definitely part of his basic equipment. The slag hammer is usually used together with the wire brush to clean the weld seams. If the weld seams are not cleaned of the slag before the corrosion protection, the protective coating does not adhere to the weld seam and is exposed to oxidation. Therefore, the welding seams are cleaned thoroughly after welding.

A welding hammer is used similarly to most hammers to strike a material. By hammering several times on a fresh weld seam, the slag produced during arc welding is released from the seam. This not only looks unsightly, but would also make it impossible to apply a rust-protective coating, as it can be easily removed. In addition to the welding hammer, a wire brush is also used for this task, which is intended to support a slag hammer. The smoother the weld seam looks after cleaning, the better the weld seam can be protected against rust.

This is particularly important where the metal compounds have a supporting function.

There are no major differences in the shape of a slag hammer, with hardly any model variations or similar tools. A slag hammer is a special hammer whose unique shape enables a welder to quickly and easily remove the annoying slag from the weld seam after electrode welding, so that the seam looks nice and clean and can be retreated. The slag hammer also has a special weight. It often differs in the shape of the handle, which can be made of different materials. A slag hammer should fit well in the hand so that it does not become heavy in the hand when welding longer seams.

hardly any other possible applications

The slag hammer used by a welder hardly needs any test seals or other safety certificates, as it is a tool of rather simple design. The slag hammers, like everything else, are tested by the Federal Material Office for their load-bearing capacity. However, there is not much choice for a buyer as the slag hammers are similar in shape and material. However, the slag hammer should be used by a craftsman with the same care as any other tool, because even with a welding hammer there is a certain risk of injury if it is used carelessly.

What is tested on the slag hammer?

Due to its simple design, a welder’s hammer is not an object that requires extensive testing before use. The Federal Material Office tests a slag hammer, as with all other tools, to determine whether it meets the legal requirements. Since there are hardly any model differences or differences in equipment as with other tools, there are no comparative tests to which a slag hammer is subjected in order to determine the best quality. At best, the individual models differ in the shape of the handle, although ergonomic handle shapes are preferred by buyers because they are easier to handle. However, there are no other criteria that can be checked in a test.

The robustness and longevity of a hammer are practically unlimited, which is why a slag hammer does not require great care and rarely needs cleaning. As long as the rust protection coating of the slag hammer is intact, the owner does not need to fear corrosion. However, if the paintwork is damaged or chipped over time, corrosion can only be avoided by recoating the welding hammer with a rust protection layer. Otherwise, the hammer threatens to rust, which does not prevent it from functioning properly. It is merely unsightly to look at.

From time to time the handle of the slag hammer should be wiped with a damp cloth.

How much is a sledgehammer?

The costs for a slag hammer amount to a few euros. Most of them are offered below the 10 Euro limit and only some professional slag hammers cost more than 10 Euro. But since there are hardly any differences in processing, models or material, the prices are close together in this narrow field. At best, a particularly ergonomically shaped handle increases the price of the slag hammer into the double-digit range. This makes the selection of the slag hammer easier, as there are hardly any differences in quality. The slag hammer is also available at low prices in all DIY stores or on the Internet.

The 3 best manufacturers and their characteristics

Einhell The tool manufacturer Einhell is located in Landau and produces tools of all kinds for home and garden. The manufacturer is known for its low prices and good quality and produces among other things also slag hammers. Zeus Zeus is the brand name of the tool manufacturers Hommels+ Keller, who produce precision tools. The company is located in Aldingen and is known for its excellent products at reasonable prices.MKTools Behind the brand name MKTools is the renowned tool manufacturer Karl Herrmann GmbH. They produce many types of precision tools and tools for precision mechanics, and they also produce slag hammers for the welding industry.

What accessories are available?

Due to its simple construction and easy handling, there are no accessories for a slag hammer.

What should a buyer pay attention to?

There is an important criterion for a slag hammer, because it must fit well in the hand and feel neither too heavy nor too light. There are hardly any differences in quality between the individual models of the manufacturers, as the design is simple and does not allow for any innovative ideas or improvements. At best, a buyer can be guided by the handle, which should be shaped so that it fits well and securely in the hand. Ergonomically shaped handles also make longer periods of work with a slag hammer more comfortable.

5 reasons for a slag hammer

A slag hammer ensures a clean weld.the welding hammer removes the annoying slag from the weld.once the slag hammer has removed the slag, corrosion protection can remain on the weld.a slag hammer makes the post-treatment of a weld easier.a well-fitting welding hammer is the easiest way to clean a weld from the slag.